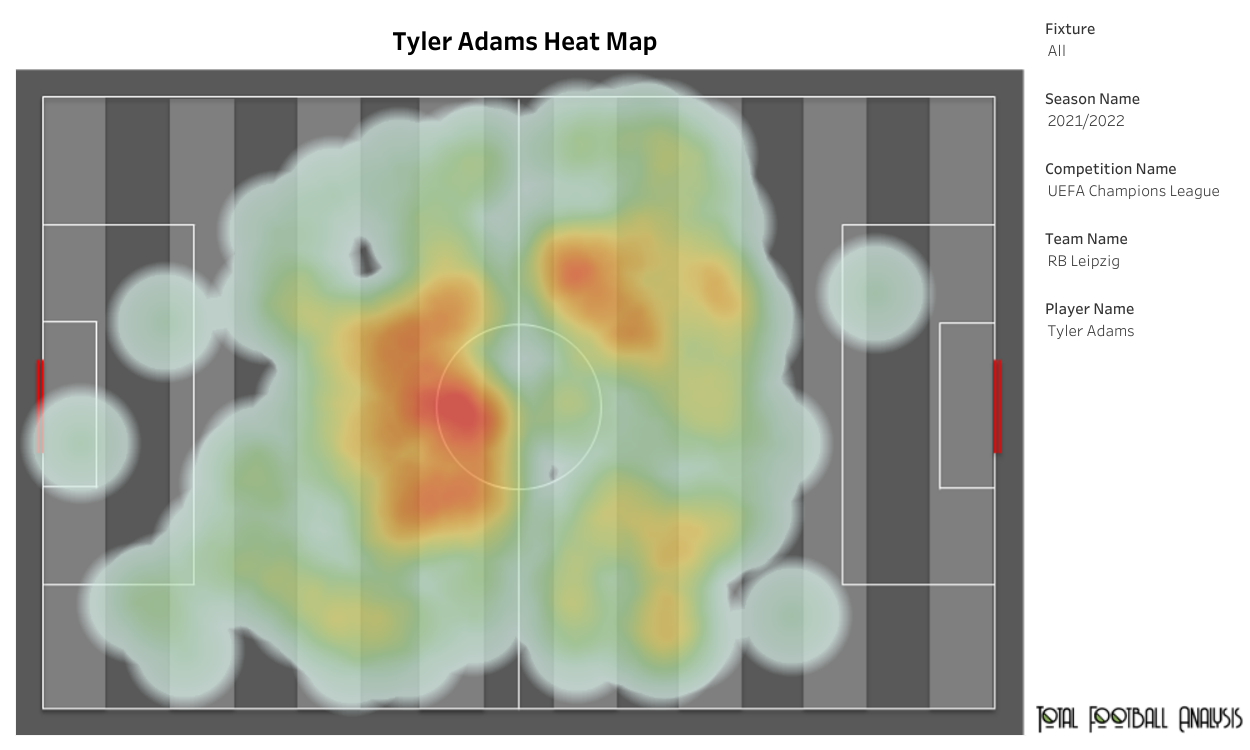 With transfer rumours constantly linking Kalvin Phillips with a move away from Leeds United, the Whites may need to bring in a replacement as early as possible to mitigate the loss of the Englishman. One such possible replacement is RB Leipzig’s American midfielder, Tyler Adams. The current Leeds boss, Jesse Marsch, and Adams have worked together previously at New York Red Bulls and at RB Leipzig. Here, we will analyse the performances of Tyler Adams for RB Leipzig in the 2021-22 UEFA Champions League season to see if he can replace Phillips at Elland Road. 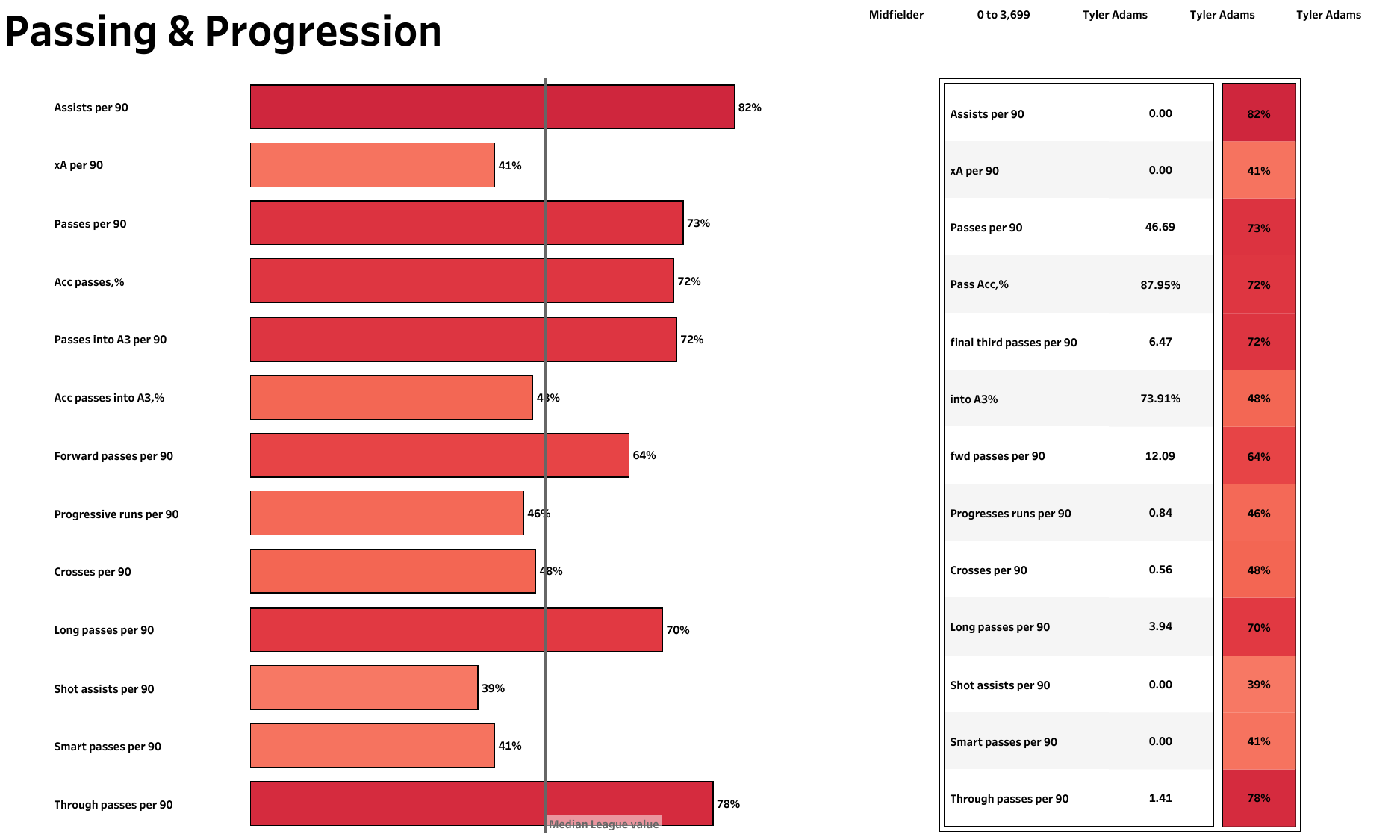 Adams made five appearances for RB Leipzig in the 2021-22 UEFA Champions League as they finished third in the group stage, behind Manchester City and PSG. Adams played a total of 293 minutes. The New York state-born midfielder attempted nearly 47 passes per 90 at a pass accuracy of 87.95%, showing that he has a safe pair of feet. The 23-year-old also attempted just under six and a half passes per 90 into the final third with an accuracy of 73.91%. Adams completed 3.94 long passes per 90 and 1.41 through balls per 90, ranking him in the 70th and 78th percentiles, respectively, for midfielders. 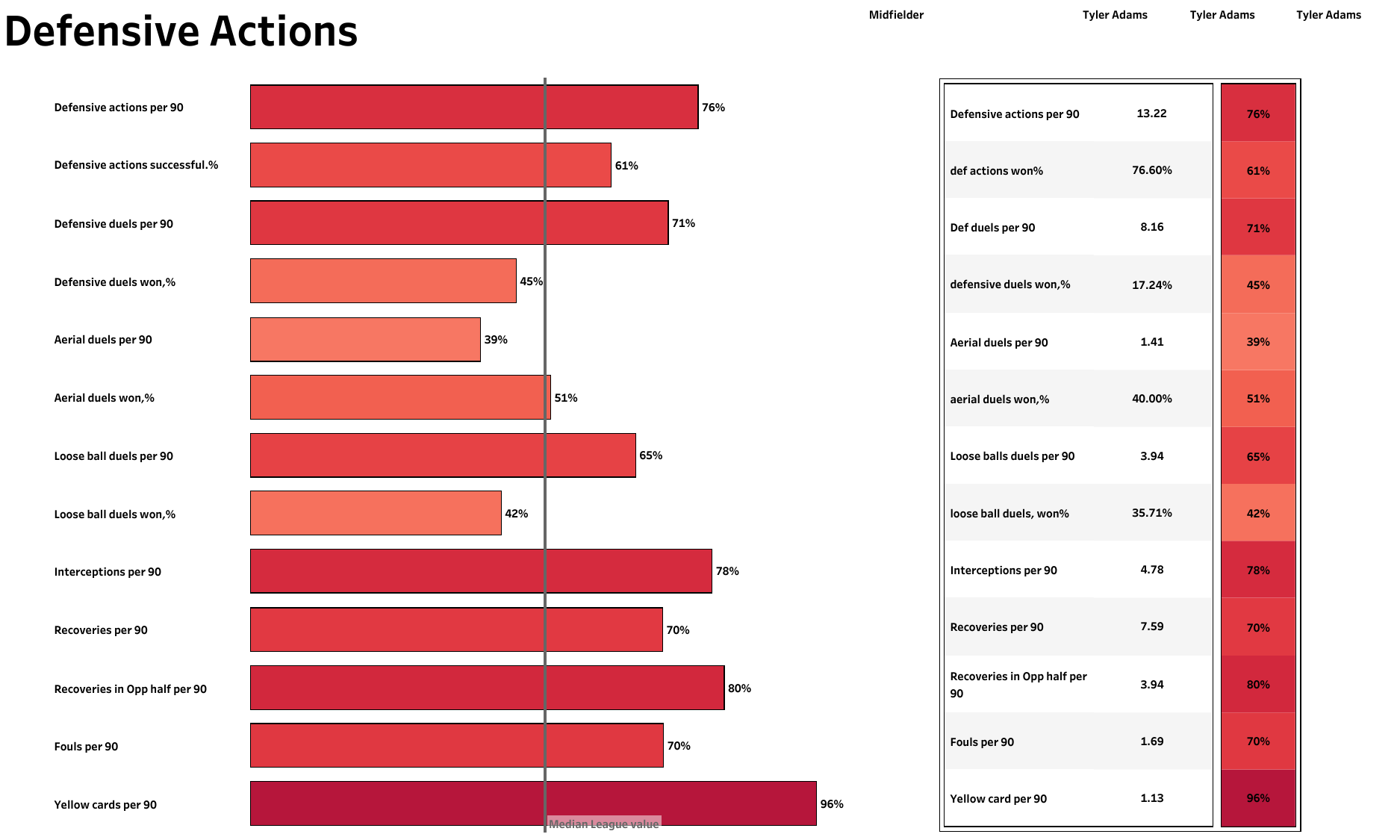 Adams attempted 13.22 defensive actions per 90 with a success rate of 76.6%. The American also attempted 8.16 defensive duels per 90, putting him in the third quartile for midfielders. He also attempted just under four loose balls per 90. In addition to all this, Adams completed 4.78 interceptions per 90, 7.59 recoveries per 90 and 3.94 recoveries in the opposition’s half per 90. One area where he must improve is his disciplinary record, as he has fetched 1.13 yellow cards per 90.

The above visual displays Adams’ heat map for RB Leipzig in the 2021-22 UEFA Champions League season. He was most influential in the midfield in his half, frequently winning defensive actions. In the 293 minutes that he played, Adams attempted 94 pressures (28 being successful), 12 tackles and interceptions and nine blocks. Going forward, he completed 16 progressive passes and 17 balls into the attacking third, in addition to completing 11 progressive carries.

Leeds United have Kalvin Phillips in their books and are playing hard ball with potential suitors for the Englishman, most notably Liverpool and Manchester City. However, the Whites are already half prepared to lose the 26-year-old Leeds-born defensive midfielder. If that is the case, the American, Tyler Adams, might just be the perfect replacement for him as he has one crucial advantage that Phillips does not have (yet) – experience in the UEFA Champions League.