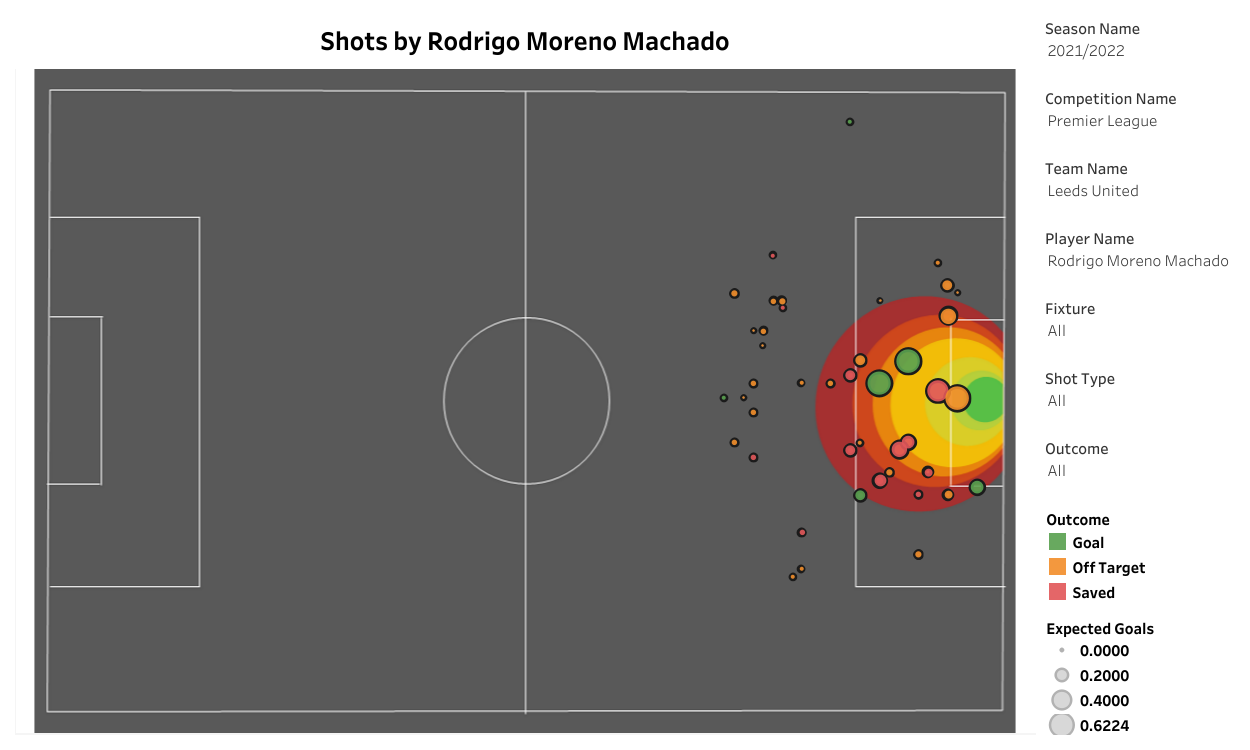 Last season, Leeds United escaped relegation by the skin of their teeth after winning 2-1 on the final matchday of the season at Brentford. To improve their squad and chances of survival in the Premier League this season, they have signed six new players, including those who had UEFA Champions League experience. However, the Whites have now officially lost both Kalvin Phillips and Raphinha after Barcelona officially confirmed the signature of the latter. In addition, some deadwood players need to be sold. One such player whose place in the starting XI is uncertain is Rodrigo Moreno. 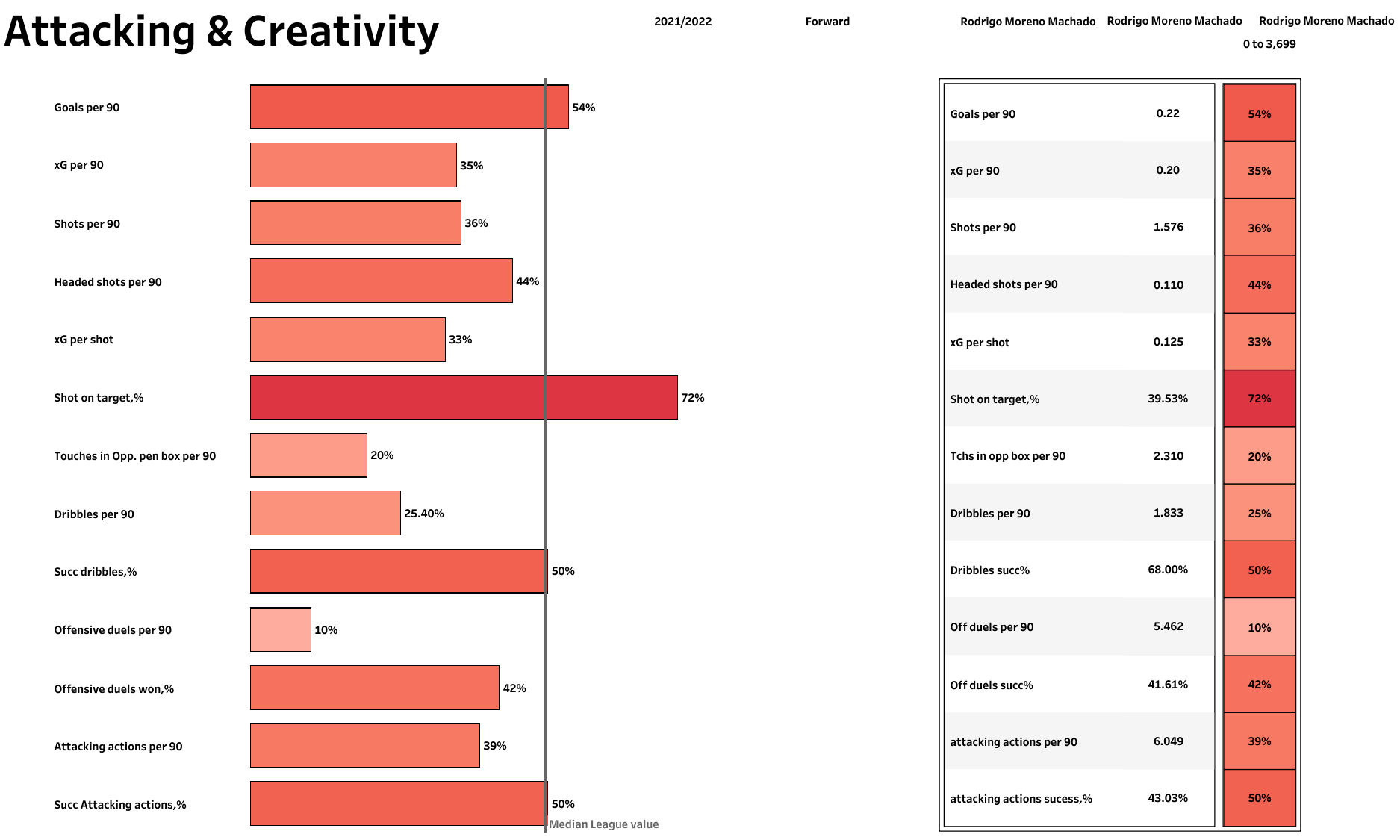 Rodrigo made 34 appearances for Leeds United in all competitions last season, which included 31 in the Premier League. He was there on the pitch for 2268 minutes. He scored six goals at a rate of 0.22 per 90. This rate is slightly higher than xG predicted. He fired off only 1.58 shots per 90, putting him clearly in the bottom half among strikers. His percentage of shots on target was just under 40%, ranking him in the upper third comfortably. The Spanish forward could register only 2.3 touches in the oppositions’ penalty area per 90, which was in the bottom quintile. He was also less involved in offensive duels per 90 and attacking actions per 90 compared to other forwards. 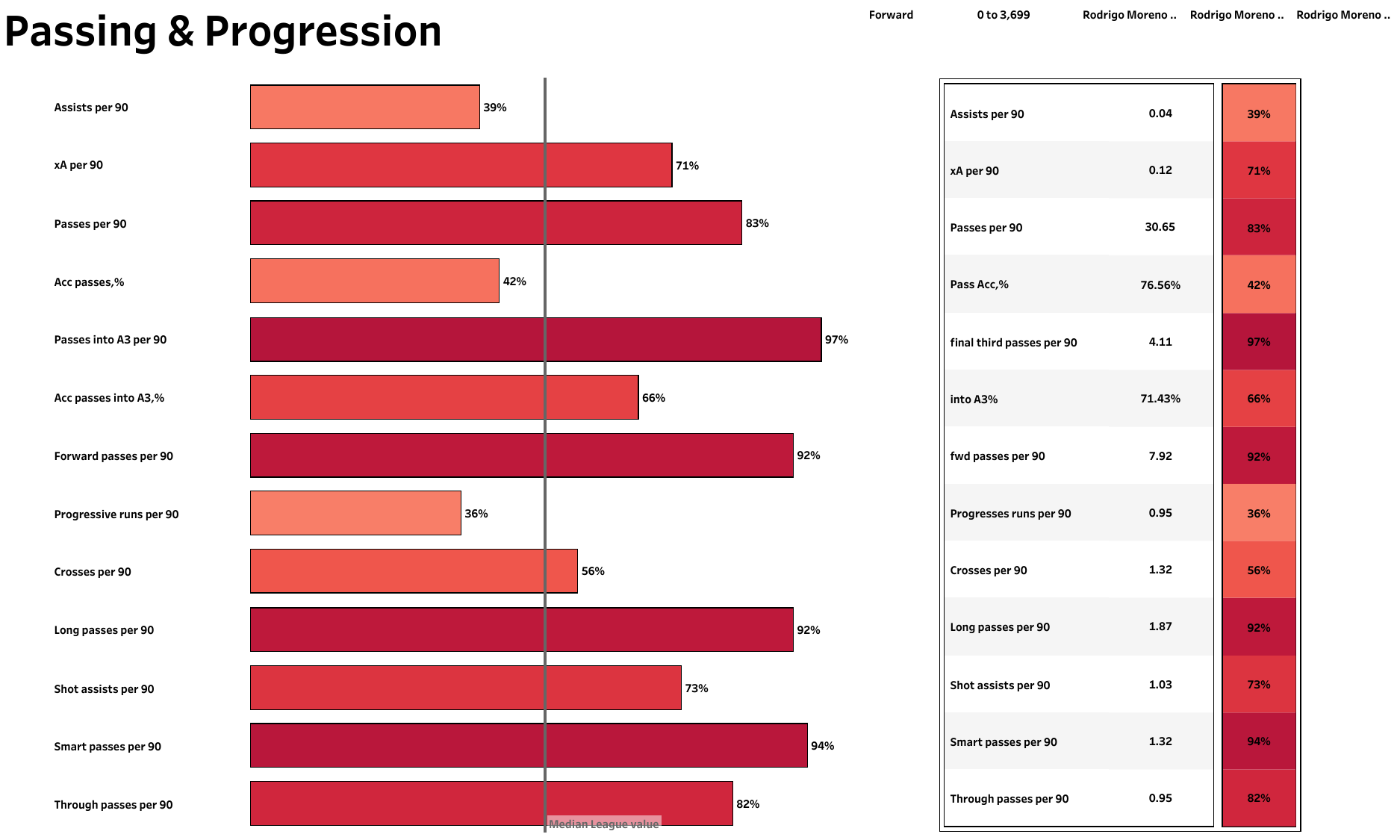 Rodrigo provided one assist, but it was a massive underperformance, as xA indicated that he should have had at least four or five last season. He attempted over 30 passes per 90, though his overall pass accuracy of only 76.56% put him in the bottom half of the latter category. The Spaniard attempted more than four passes into the attacking third per 90 and had a respectable pass accuracy of 71.43%. He was placed in the bottom half for progressive runs per 90, with just 0.95 to his name. With 1.87 long balls per 90 and 1.32 smart passes per 90, he was ranked in the 92nd and 94th percentiles, respectively.

Rodrigo scored six goals last season, four of which came from inside the box. The remaining two strikes came from way outside the box. At the same time, he missed a couple of big chances from close range. Overall, he took 48 shots, meaning his conversion rate stood at eight shots per goal scored. 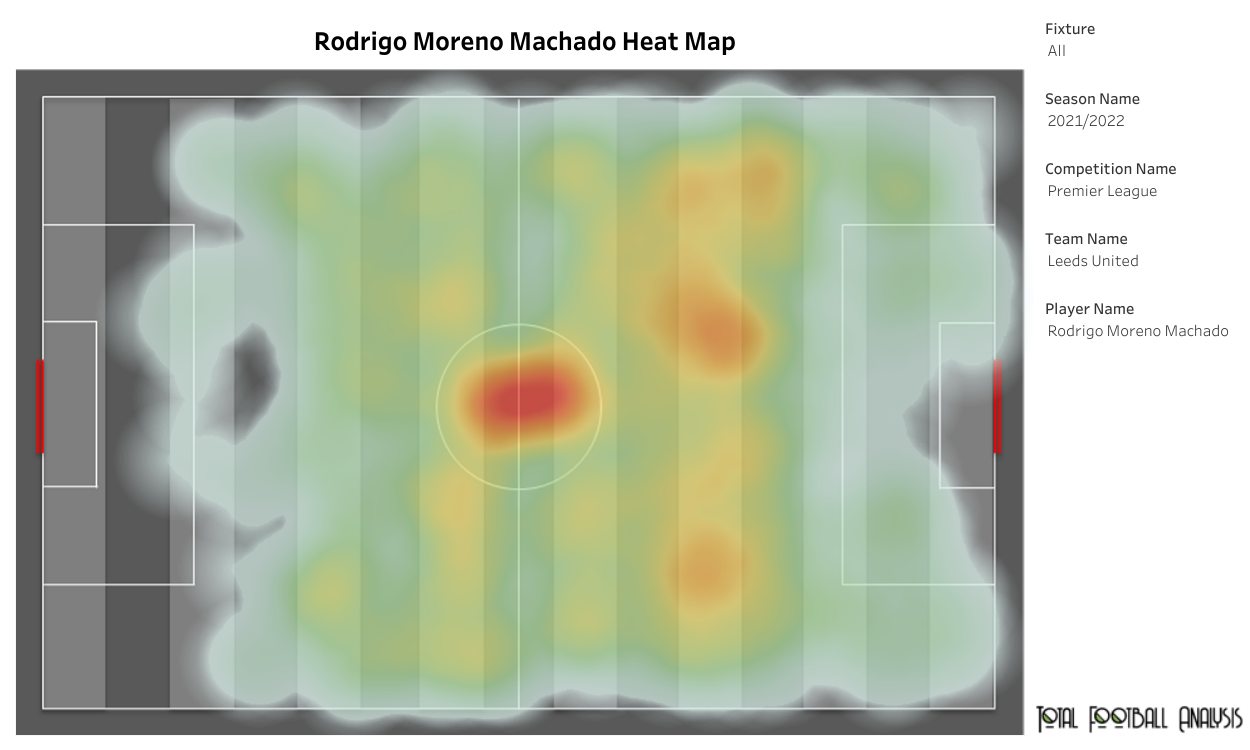 Despite being a forward, Rodrigo was more active in the midfield. And it could have been his role as he tended to drop deep and conduct play, which perhaps explains the very high passing numbers he racked up throughout the season. He completed over three progressive passes per 90, 1.35 passes into the penalty box per 90, and 1.59 key passes per 90 whilst also receiving 7.58 progressive passes per 90.

Rodrigo Moreno has not fully justified his price tag of €30 million paid by Leeds United in August 2020, as he scored only 13 goals in 61 games for the Whites. With rumours of the Turkish giants, Galatasaray, showing interest, the Whites may have to cut their losses with the Brazil-born Spanish international.