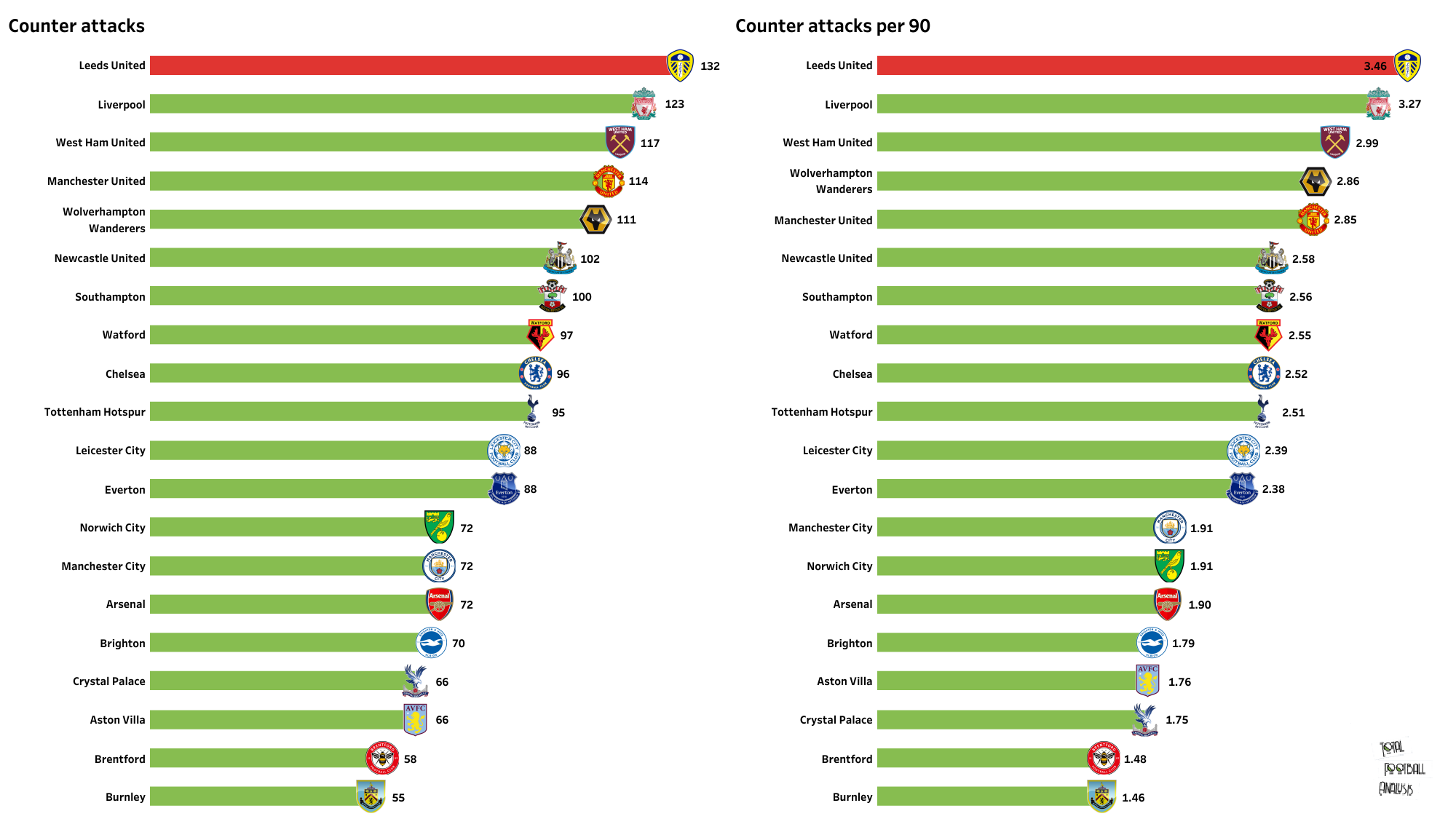 Leeds United host Chelsea in what is a crucial game for the team from West Yorkshire for their survival in the Premier League. In the reverse fixture which took place in December 2021, the West London outfit emerged as 3-2 winners thanks to two penalties from Jorginho. Coming into this game, Leeds lost 1-2 away at Arsenal, and Chelsea drew 2-2 with Wolves.

Leeds United come into this clash after a 1-2 away loss to Arsenal at the Emirates Stadium. Leeds’ only goal came through Diego Llorente, and the Whites were down to 10 players for more than an hour as Luke Ayling was sent off in the 27th minute. This loss pushed Leeds into the relegation zone with three games left. Their record stands at eight wins, 10 draws, and 17 losses. This season, Leeds United have made the most counterattacks of any team in the Premier League, with 132 to their name. This might be the best tool Leeds have at their disposal against Chelsea. 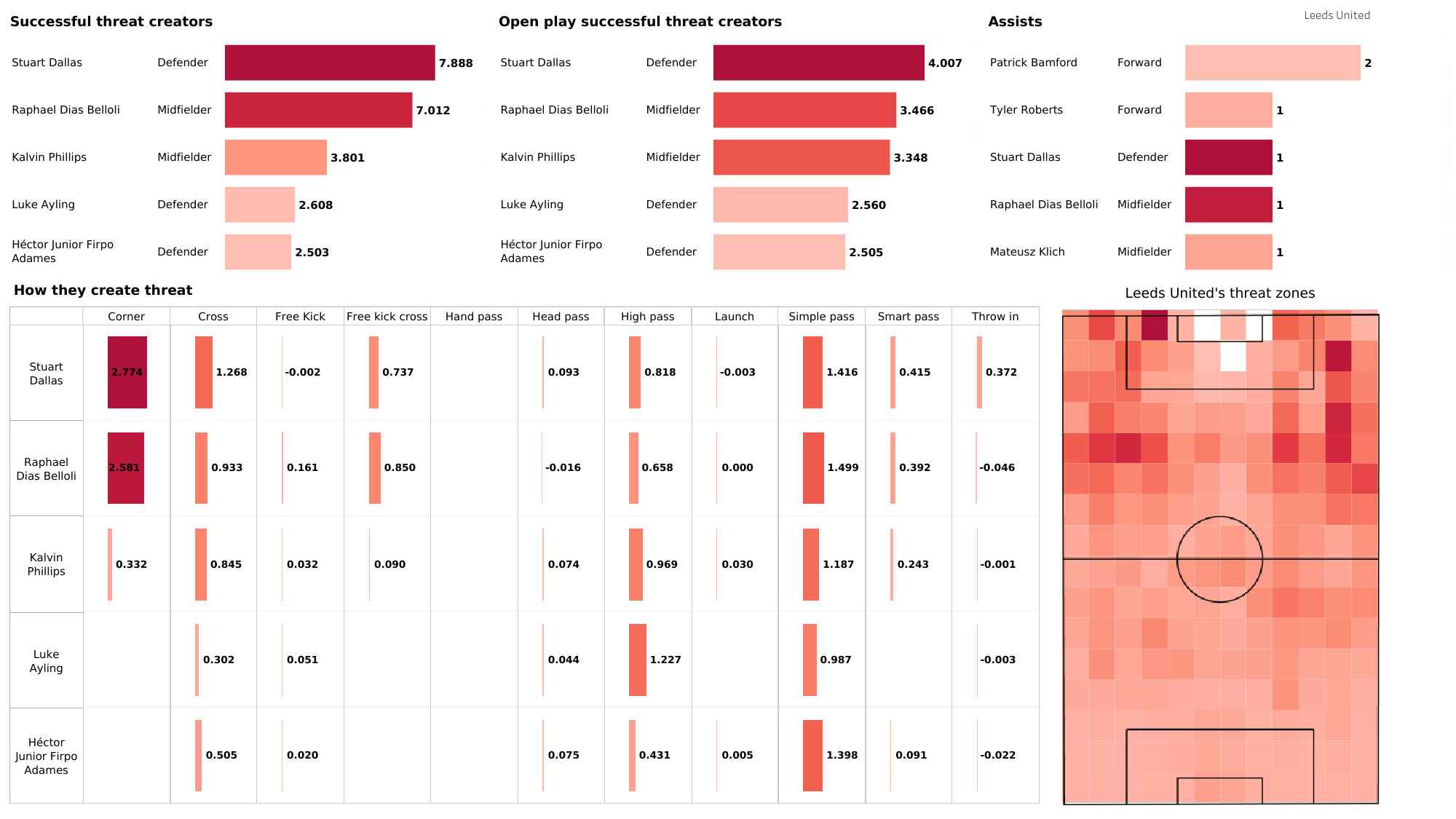 Northern Irishman, Stuart Dallas, has been Leeds United’s most successful threat creator from both open play as well as from set-pieces. In second and third places come Raphinha and Kalvin Phillips, respectively. The leading assist maker for the Whites this season is Welshman Daniel James. He has provided four assists, which is above the xA value of 2.4. 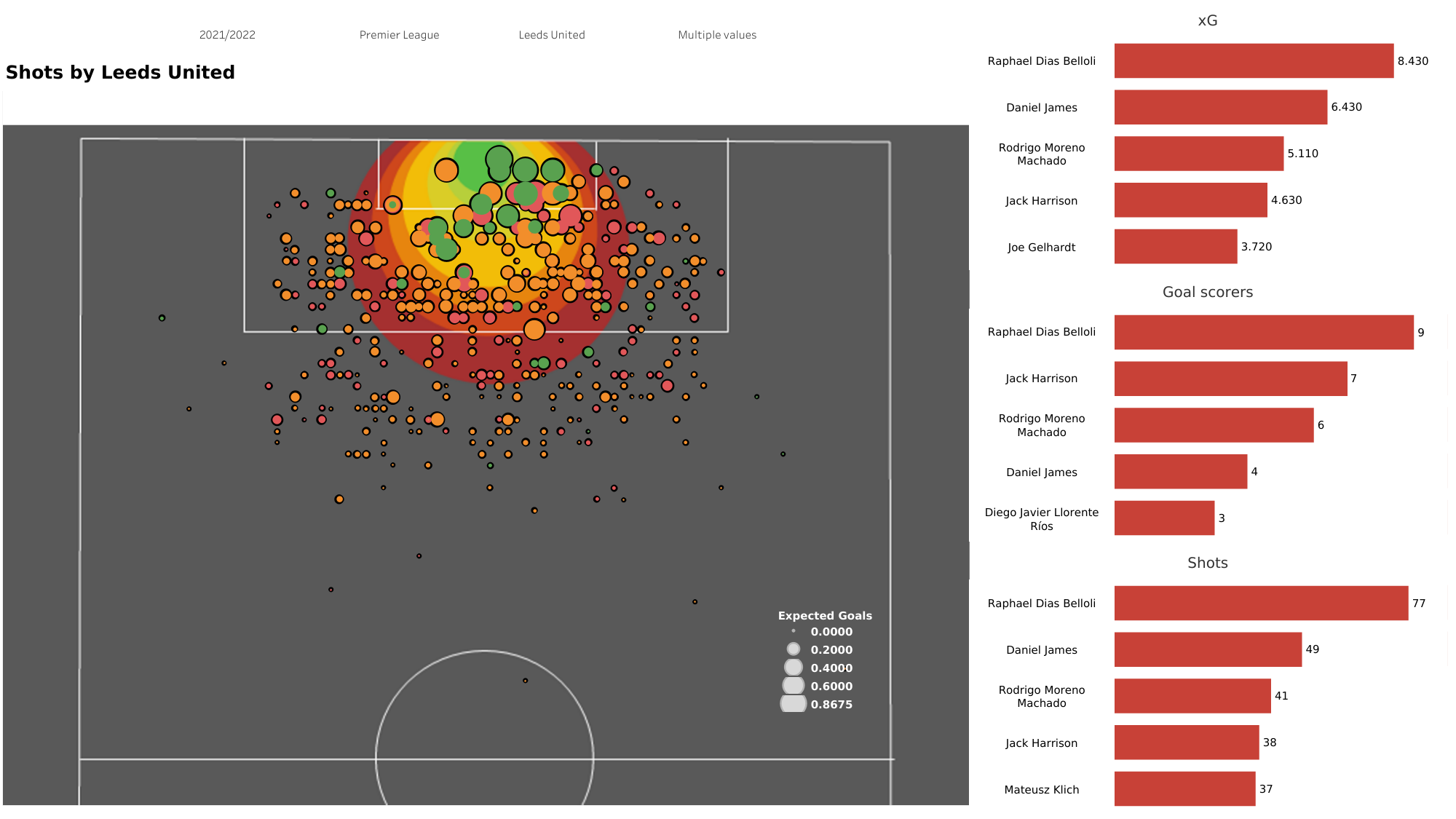 Above is the shot map of Leeds United in this Premier League season, excluding penalties. The Whites have managed to score only 35 goals. Raphinha has scored the most goals for the team, with 10 goals to his name (three being penalties). Leeds United have missed quite a few big chances which had an xG value of 0.5 or more. Had they buried those chances, the Whites could have comfortably been mid-table instead of being in a relegation battle. 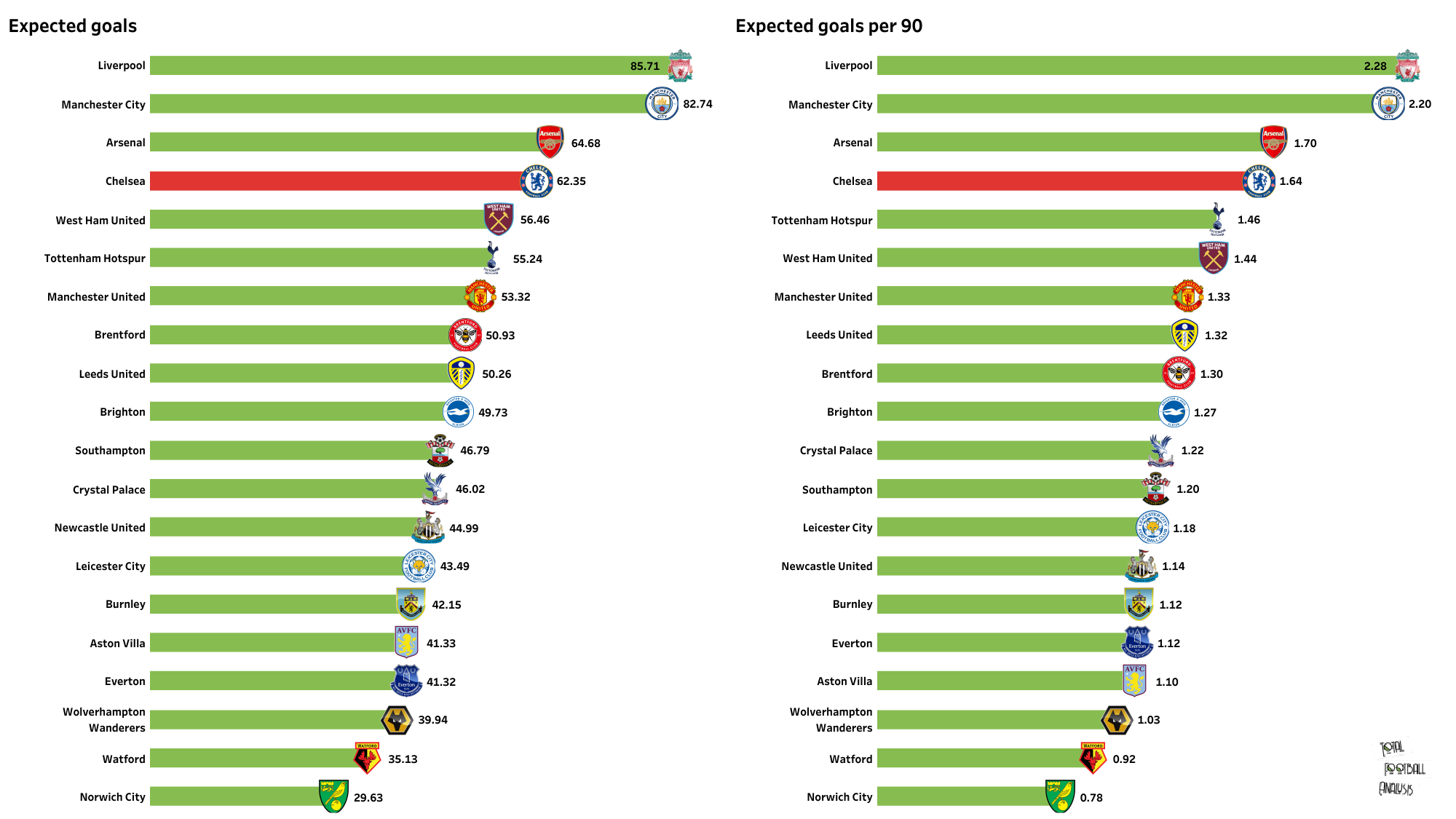 Chelsea head into this match having drawn 2-2 with Wolverhampton Wanderers at Stamford Bridge. Romelu Lukaku scored both the goals for Chelsea before Francisco Trincao and Conor Coady netted for Wolves (the latter’s goal came in stoppage time). This draw left Chelsea with a record of 19 wins, 10 draws, and six losses. The Blues have scored 70 goals this season, above the estimated xG value of 62. 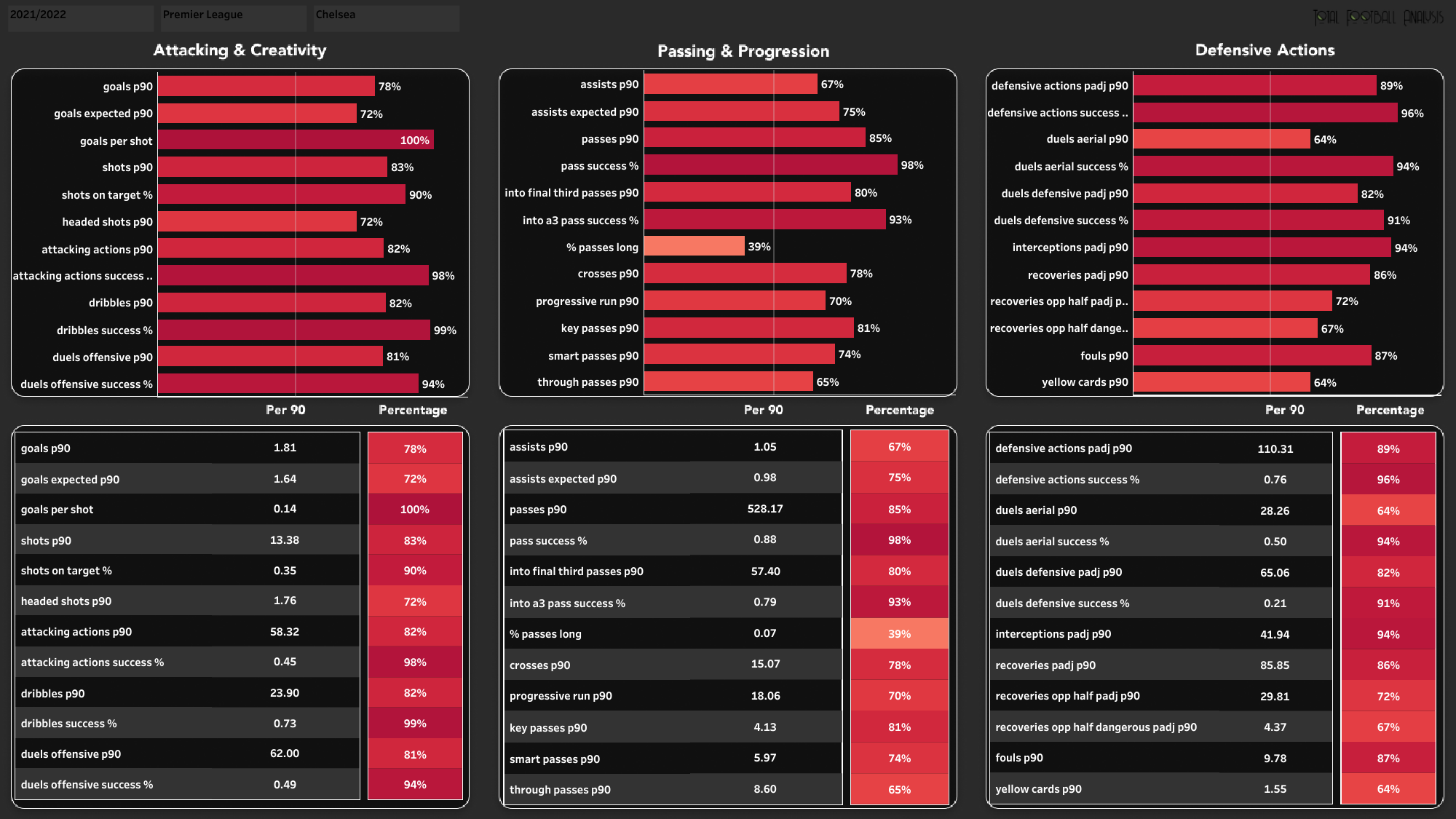 Given in the above chart are the performances of Chelsea in this Premier League season relative to the rest of the league. Not only Chelsea are outperforming their xG per 90 this season, but they are also overperforming on their xA per 90 of 0.98, with 1.05 assists per 90. The Blues are also recovering the ball nearly 30 times in the opposition’s half, putting them in the top 30%.