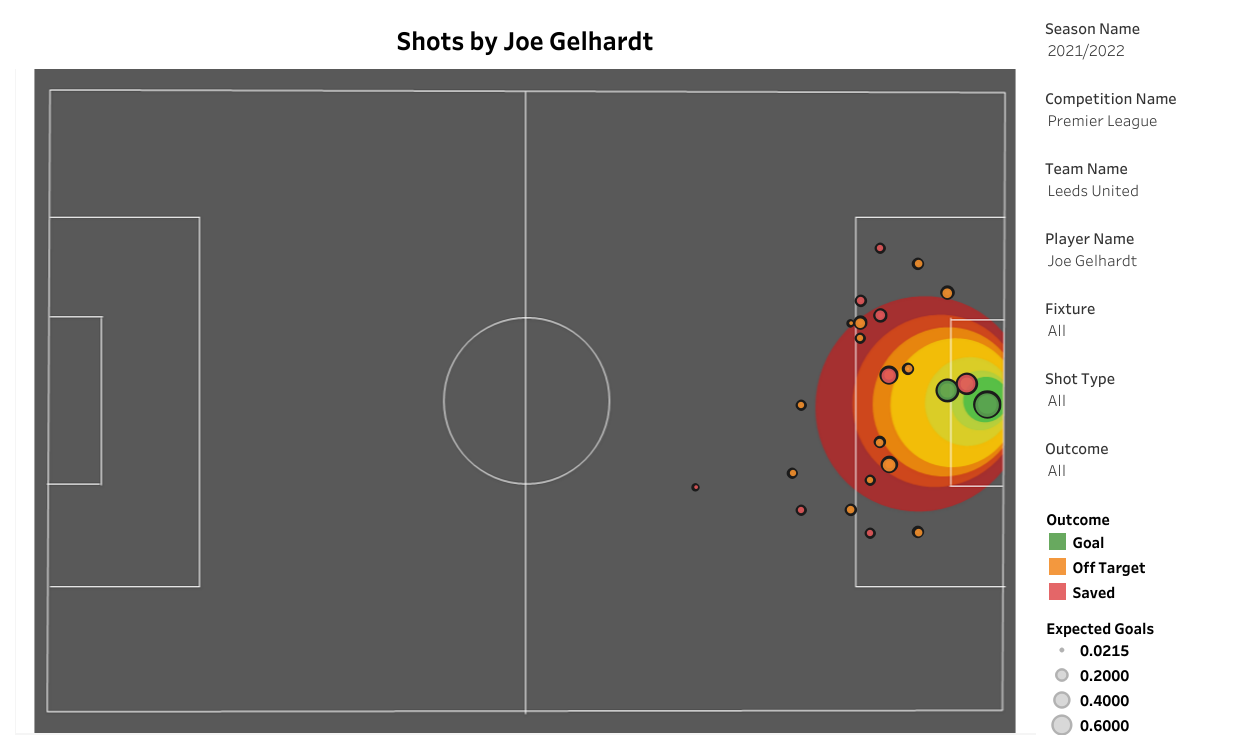 Leeds United barely escaped relegation last season, needing a win on the final matchday to secure their status in the Premier League. They have since lost both Kalvin Phillips and Raphinha to Manchester City and Barcelona, respectively. But the Whites have done a smart rebuild, signing Tyler Adams and Marc Roca from RB Leipzig and Bayern Munich, respectively, to replace Phillips. As for Raphinha’s replacement, they have signed the Colombian Luis Sinisterra from Eredivisie giants, Feyenoord. However, one man who could possibly thrive under Jesse Marsch is not a new incoming transfer, but striker Joe Gelhardt. 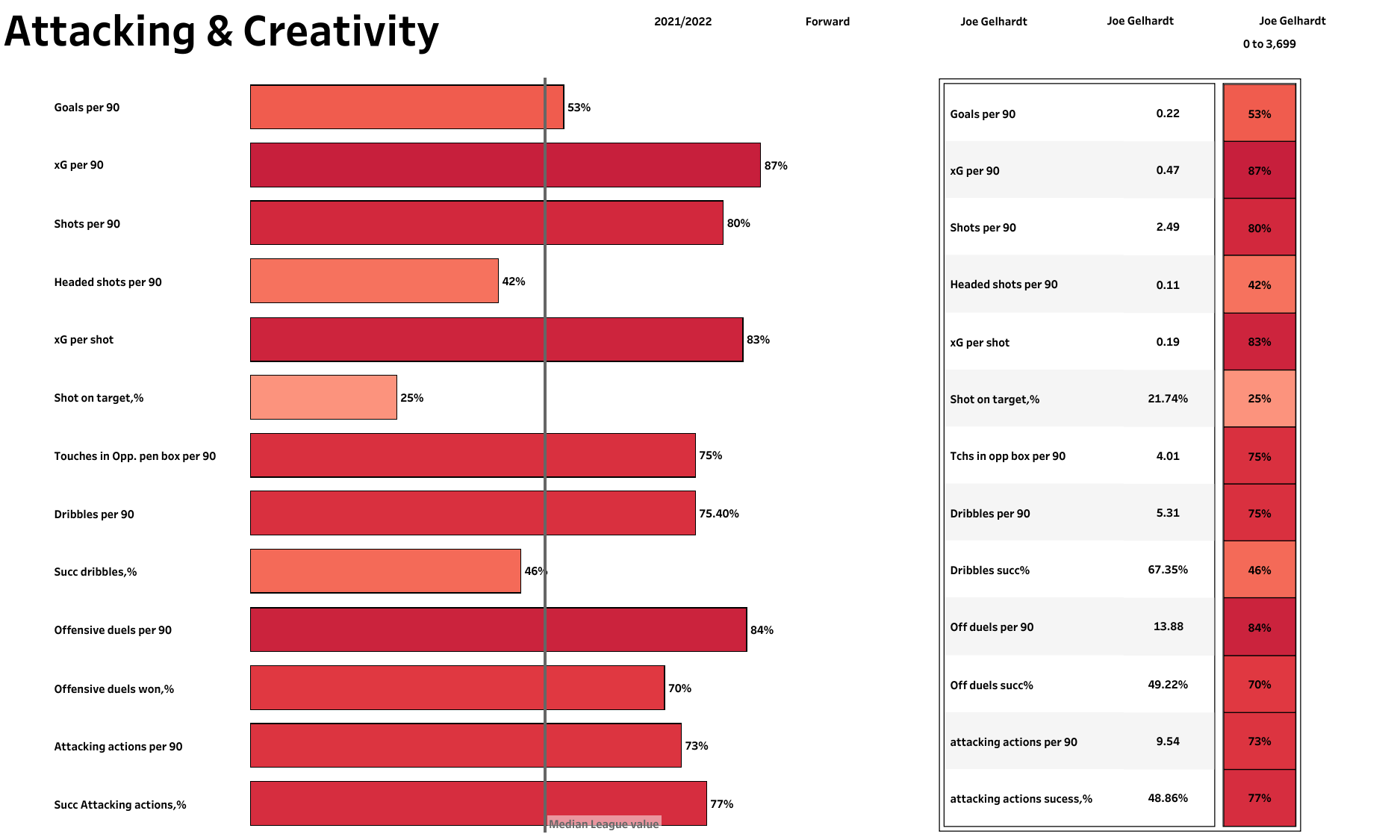 Gelhardt made 33 appearances for Leeds United last season in all competitions. This included 20 Premier League games where he played for 732 minutes. He scored only two goals at a rate of 0.22 per 90. This is much worse than xG per 90’s prediction of 0.47. He fired off just under 2.5 shots per 90 but could muster only 21.74% of them on target. This is in spite of generating an xG per shot of 0.19, putting him in the upper 17%. He registered four touches in the oppositions’ penalty area per 90, placing him in the upper quartile. He contested nearly 14 offensive duels per 90. 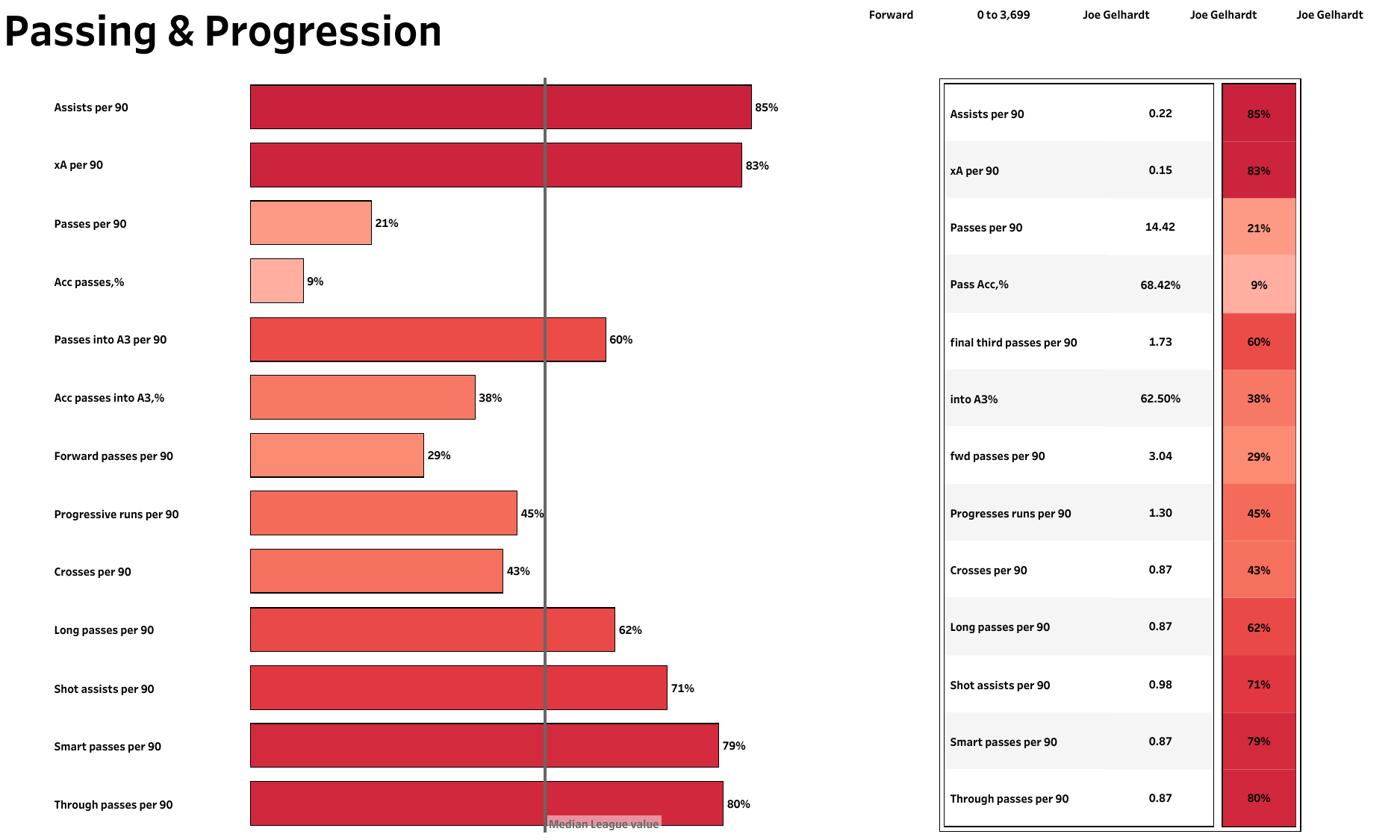 In addition to his two goals, Gelhardt provided two assists at a rate of 0.22 per 90. This was slightly higher than xA per 90’s estimation. He was largely anonymous in build-up play, averaging only 14.4 pass attempts per 90 at a woeful pass accuracy of 68.42%. He made only 1.3 progressive runs per 90, placing him in the bottom half among forwards. He also had 0.87 smart passes per 90 and through balls per 90 each, putting him in the upper quartile in both these categories.

As seen in the above shot map, Gelhardt took the vast majority of his shots from inside the box. In fact, he attempted only six shots from outside the box. Yet, he could score only twice. He missed at least two fairly big chances in front of goal, which explains his underperformance compared to xG. His number of shots attempted for the season was 22 and only nine of those tested the opposition keepers. This meant that he took nearly 11 shots to score a goal, which is not efficient, to say the least. His average shot distance from goal was 15.8 yards.

Joe Gelhardt underperformed last season, especially in front of goal. So, he will need to improve his finishing ability. Thankfully, he is aged only 20 and can improve a lot this season. However, one reason he could thrive under Jesse Marsch is his defensive work rate off the ball, as according to FBREF, he ranked very high in attempted pressures per 90 and other defensive actions such as tackles, interceptions and blocks.