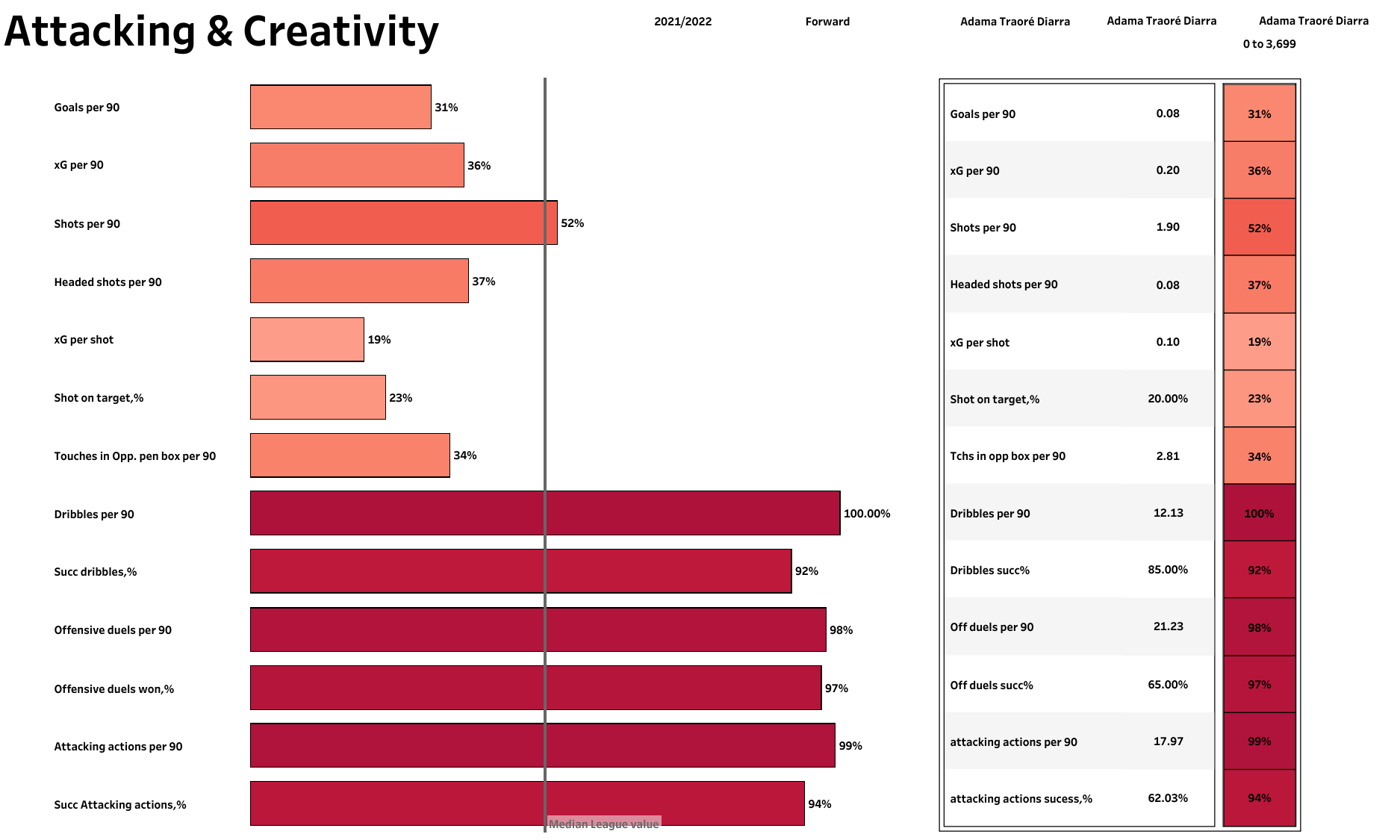 Raphinha was the undisputed star for Leeds United in the recently concluded 2021-22 Premier League season as the Whites managed to avoid relegation on the final matchday of the season. However, with several clubs circling like vultures for Raphinha’s signature, the Brazilian is most likely to leave Elland Road this summer. If that is the case, then the 2019-20 EFL Championship winners will have to bring in a replacement for the Porto Alegre-born winger. One such possible option is Wolves and Spanish winger, Adama Traore.

Traore made 20 appearances for Wolves in the 2021-22 Premier League season before heading off to Barcelona for a six-month loan spell in January 2022. The Spanish winger, who is of Malian descent, managed to score only one goal in the Premier League and did so at a woeful rate of 0.08 goals per 90. The 26-year-old underperformed on his xG per 90 of 0.2. Traore fired off just under two shots per 90 and hit only 20% of these on target. The winger’s biggest strength is undoubtedly his dribbling ability as he attempted a whopping 12.13 dribbles per 90 and completed a sky high 85% of his take-ons. Traore contested over 21 offensive duels per 90 with a success rate of 65% and was also involved in just under 18 attacking actions per 90 with a success rate of just over 62%. 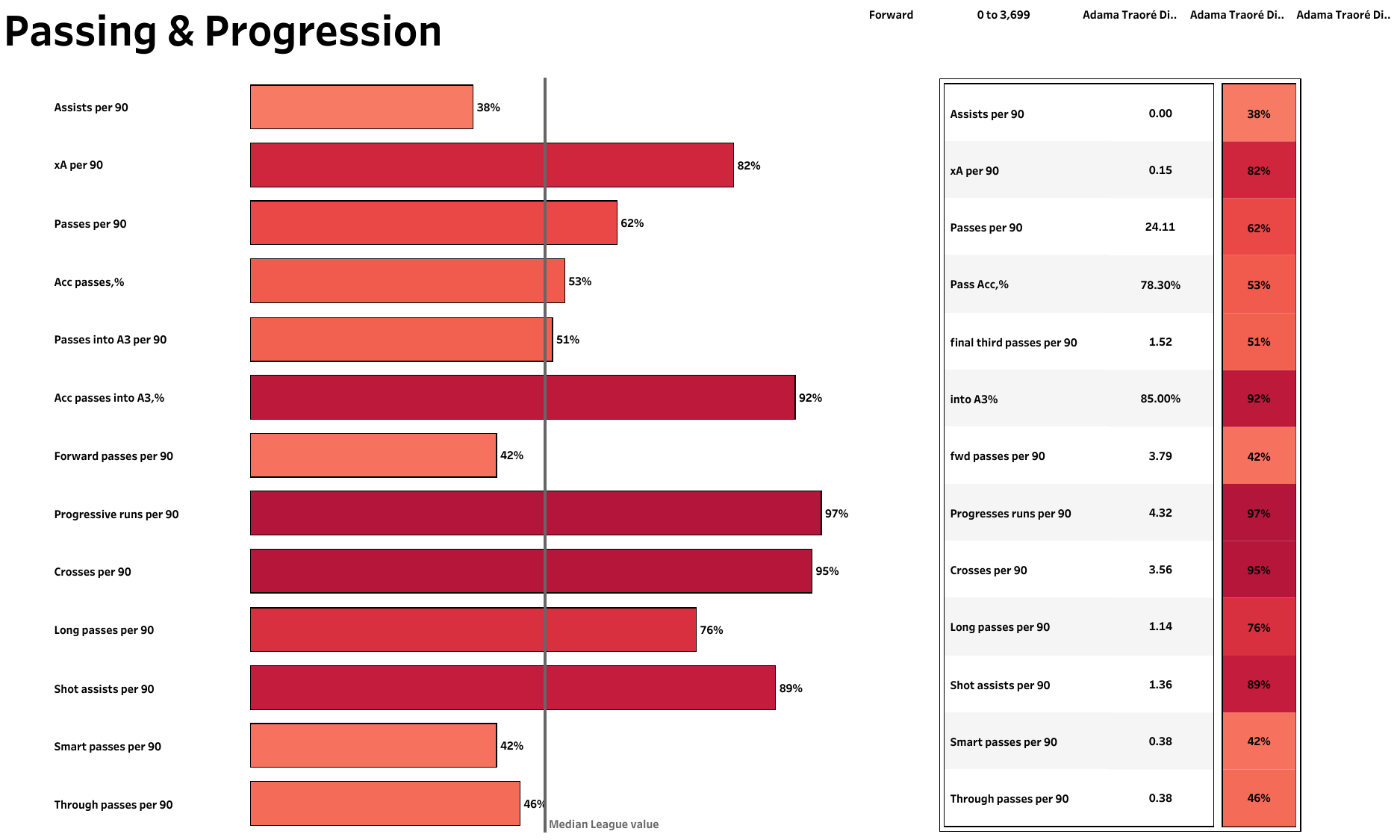 Traore did not provide even a single assist for Wolves in the Premier League last season as he underperformed on his xA. The Spaniard generated 0.15 xA per 90, which put him in the upper quintile for forwards. Traore’s overall pass accuracy was only 78.3%, but his balls into the final third found a teammate on 85% of the occasions, putting him in the 92nd percentile for forwards in the latter category. The 26-year-old winger also made 4.32 progressive runs per 90 and delivered 3.56 crosses per 90, which ranked him in the top 3% and top 5%, respectively. Traore also provided 1.36 shot assists per 90, showing that he was unlucky not to get a few assists. 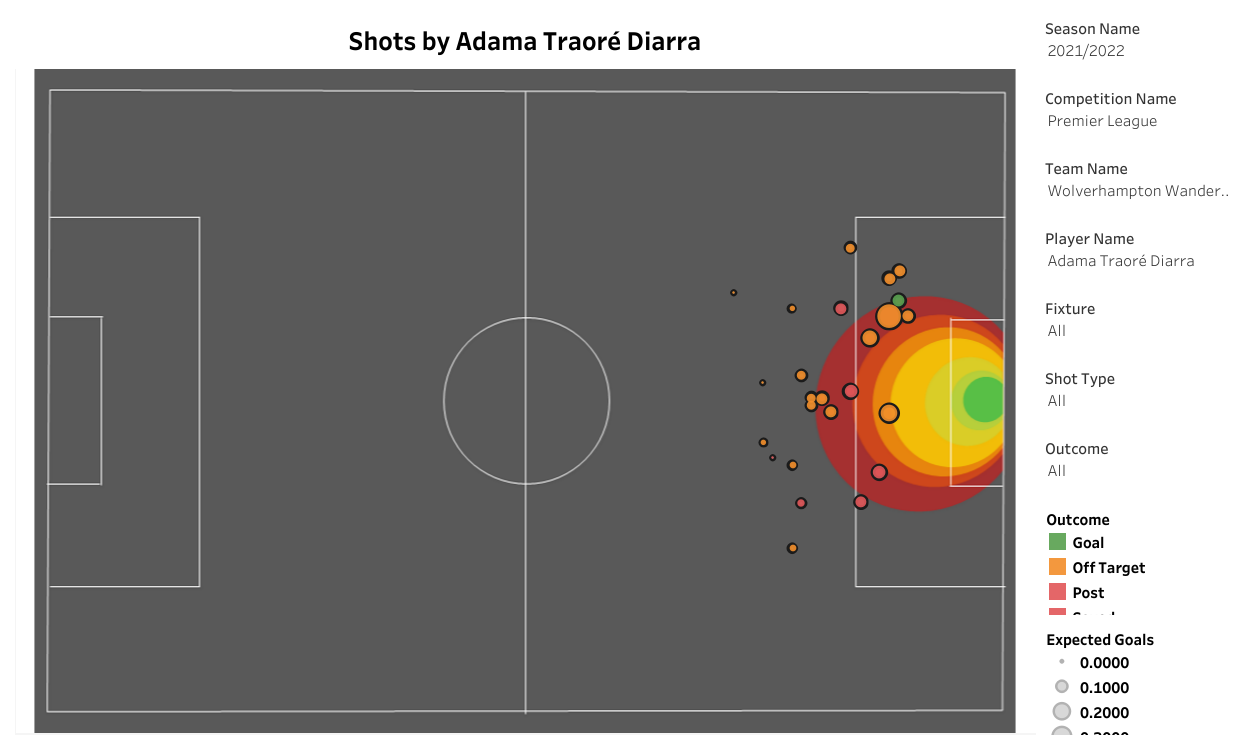 In the above shot map, we can see that Traore attempted the majority of his shots from outside the box. The Spaniard barely tested the opposition keepers, hitting only six shots on target out of 23 attempts. The average shot distance of Traore for Wolves was 18.9 yards from the goal.

Adama Traore, this campaign was a far cry from the 2019-20 season where he had 13 goal involvements for Wolves. Even his loan spell with Barcelona was not successful as the winger played only 382 minutes in LaLiga and provided only two assists without scoring even once. So, it is very clear that the 26-year-old Spaniard lacks the end product to take over Raphinha at Leeds United.